Brownies are one of our all time favorite desserts. I have to admit that I despise cooking a whole box that calls for a 9″x13″ pan. When I do it seems that all self control goes right out the window! (Does anyone else have this problem with chocolate too? ~grins~)
Since making the crock pot muffins in jars I realized that the jars are perfect for single serving size portions. Not only that, but I can pack them up easily by placing the lid on top of the jar when they’ve completely cooled down. We then have a perfect dessert or snack to pack in lunches, take on picnics﻿ or take to pot lucks/ barbecues without having to pack a knife to cut into squares. And this way (in the case of the brownies specifically) everyone gets an edge piece… which happens to be my personal favorite.

Mix the brownie mix according to package directions. Spray the inside of each canning jar with the non-stick cooking spray. Evenly divide the brownie batter between all four jars.

Place the jars inside a 5 – 6 quart crock pot. Make sure that none of the jars are touching each other or the sides of the crock pot. This will help them to cook evenly.

Put the lid on top of the crock pot and turn the crock pot to high. Cook for 2 1/2 – 3 1/2 hours. Mine were ready at exactly 2 hours and 55 minutes. You are looking for the brownies to start to pull away from the sides of the jar. The center will still be a little gooey and a wooden skewer or toothpick will NOT come out clean at this point. That’s okay though. When you remove the lid and turn the heat off there will be some residual heat that will continue to cook the brownies. Trust me on this one, you don’t want overcooked or burnt brownies.

When the jars have cooled enough to handle them remove them from the crock pot and place them on a folded dish towel or cookie sheet to finish cooling. Make sure they are not in a drafty area and no fans or air conditioning are blowing on them. That could cause the jars to break… EEEEK! We don’t want that to happen. 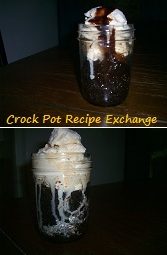 When the jars were completely cool enough to handle and the brownies were still a little warm, we served ours up as brownie sundaes.

I let the two extra ones (don’t make that face, there WERE two extra ones left) completely cool and then placed the lid and rim on the jar and stored them on the counter. I sent one with my husband to work today and I’m saving one for myself to make another sundae out of.

This recipe shared at Cast Party Wednesday,  Foodie Fridays and Melt In Your Mouth Monday.